WHAT HAPPENED TO THE WIKILEAKS CABLES OF THE DEPARTMENT OF STATE?

The genius of the United States of America, to "rescue" 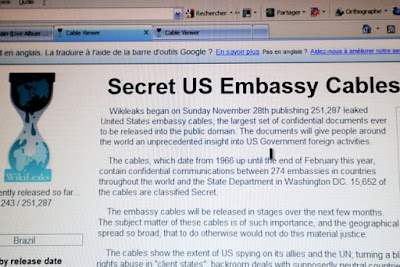 WikiLeaks intelligence and "transparency" organization founded by Julian Assange in December 2006, after the successful "coup" of 2010 in which they obtained and disclosed to the world the secret and confidential archives of the Pentagon relating to the wars in Iraq, Afghanistan and those of the State Department concerning their intelligence reports on operations, profiles, businesses and other ills in all countries of the world, where the United States of America has a direct, indirect or circumstantial impact .... Suddenly, these "files" stopped being revealed or made known.

In 2010, after these leaks. Immediately the United States of America moved all its tentacles and resources to punish those responsible, and then "stop" that matter.

- Cut or diminished all information.
- Cut or reduce any source of funding.
- Detected, imprisoned or exiled the "filterers": Chelsea Manning and Edward Snowden.
- They cornered Julian Assange by making criminal records and extradition requests that forced him to go into exile at the Embassy of Ecuador in London England.

THE GREAT JOB OF UNCLE SAM.

Before the measures taken by the United States of America ... Julian Assange was forced to "suspend" the issuance of all these "leaks" on the official WikiLeaks website, not having enough economic and human resources for such a titanic work. These are more than 250,000 "cables" and barely two thousand have been uncovered.

When they were "tied hand and foot," they unexpectedly began to tempt him with various, varied, and multiple offers to yield, sell, or "share" such valuable information to an "independent media troika" led by The New York Times, German Der Spiegel, Britain's The Guardian, Frenchman Le Monde and El Pais, from Spain.

Already in December of that same year 2010, these media had "the world's first" to give "continuity" to the revelation of such delicate, sensitive and historical information .... Beginning with "dripping" to make known some and "strangely" keep others in the darkness. Finally: These "cables" were transferred "exclusively" to several "independent" media in all parts of the world ... Those who acquired "local representation" of all those documents that concern their respective countries.

In the case of the Dominican Republic, this "franchise" was in charge of two "independent" media, which "coincidentally" have very strong links with the United States Embassy. At the outset, he revealed some "cables" of particular interest, to BURN or VALUE certain situations or characters, while "reserved" the emission of PROFILES of various personalities and FACTS of the national task. After 2 months ...! PUBLICATIONS WERE OVER!

Today you have stopped "enjoying" the publication of those "cables" in ALL THE MEDIA that acquired the "scoop" of the emission of them. It is still unknown, the content of the remaining 240,000 CABLES, from the State Department.

WHAT HAPPENS TO WIKILEAKS CABLES?

They were simply acquired by "independent" media related to the United States of America, through Wall Street or the International Agency for Development (USAID) ... They filtered those THAT CONVENIENT ... And they saved the rest. We stayed, without almost all the answers. Solved case.
Publicado por Manuel Miranda en 2:13 PM 2 comments: Enlaces a esta entrada