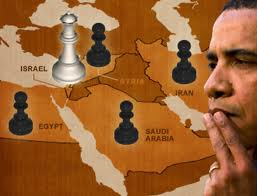 The powers start new game and the cards are dealt.

Many will ask what is the relationship between conflicts of Ukraine with the confession of Alfonso Portillo, former President of Guatemala, with the new world order that is just beginning.

It is a puzzle, we will try to explain:

As you know, violent protests put paid to the pro - Russian government in Ukraine, which are attributed to the United States and Europe.

This resulted in the reaction of Russia, who quickly retaliated with the invasion and annexation of the province of Crimea by referendum of dubious cleanliness, having been summoned and made ​​in a matter of 2 weeks.

This situation forced negotiations between the U.S. and Russia, to China later incorporated popular ...

Negotiations, not suck for us the finger, mean: CAST.

Ukraine is a country that as a former territory of the Soviet Union , cultural and historical ties , natural resources , strategic location ... means a lot to the "Mother Russia" , who with their annexation to Crimea, have demonstrated reliable , to be " ready for anything " to get it back.

In that sense, the results of those negotiations, little by little, are coming to light:

The announcement of the Free Trade Agreement between Russia, Belarus and Israel.

Which means that from now on, the Palestinians have nothing to look at their former territories, the choice goes to formally join the State of Israel or to go with his motets to Syria, Jordan, Egypt and elsewhere that want to accept as their own.

Israel, it is no longer “security problem “in America, in the Middle East ... Russia has just become guarantor.

Bribery Taiwan to be recognized as "independent country" for Guatemala.

Just yesterday , former President Alfonso Portillo of Guatemala , extradited to the United States , accused of " laundering " has reached a settlement, confessing guilty of accepting $ 2.5 million , from Taiwan to it was recognized as "independent country" and thus establish bilateral relations "between sovereign states "

This confession is not purposely accusations against former President Portillo , covering drug trafficking operations , more than 150 million dollars ... And the arrangement is reduced to insignificance , in passing, throwing mud on the government Taiwan.

This certainly puts into question the "legitimacy” with which Taiwan has achieved recognition as” independent state” or "legal government” for several countries, most notably the Third World, likely corruption.

You'll see in the coming months as China Popular, taking this as an excuse, shall, to the reinstatement of the island of Formosa, its jurisdiction.

Taiwan, forget it, "Dream”, independent State or Government with jurisdiction over mainland China.

The Russian is Russian.

The Chinese, will be China.

Do not be surprised, that soon, the United States of America, as “retaliatory action " , proceed to the merger, in one country , the Dominican Republic and Haiti ... " Recover " Cuba and install Governments or Presidents Related to their interests on this side of the hemisphere.

I remind you that Americans, Russians and Chinese, they have long history of beneficial arrangements for all, when their interests are threatened ... Whether to stop the Nazis, Japanese and Iranian....
Publicado por Manuel Miranda en 9:13 AM No comments: Enlaces a esta entrada

EL SALVADOR 2014 PRESIDENTIAL ELECTION: Results and predictions, in the second round. 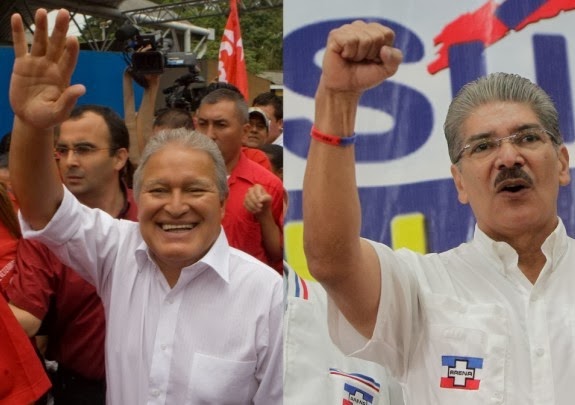 This Sunday, the sister Republic of El Salvador, held the second round of the elections, which elected President and Vice President, for a period of 5 years.

Even if you do not believe it, we are to forecast, very difficult, where anyone can succeed. True, the candidate of the Farabundo Marti National Liberation Front ( FMLN), classified comfortably to the second round, nearly 2 points to 50%.

But this case is very different, there is a gap, it does, that this second round is unpredictable:

- The distance between first and second place, thousandths, did not exceed the 10 percentage points in the first round.

So far nobody has been able to overcome advantages of more than 10 points from there to many parts of the world, has been consecrated, that candidate winning more than 45 % with 10 percentage points of advantage over the second, automatically, you will declare a winner ... But that's not the case ... As we said, above, by thousandths (equivalent to a handful of thousand votes), was not achieved.

- The " give and take " between Russia and the United States , with the probable " hostage exchange " part of the second , giving Ukraine, in favor of the former, in exchange for his " primacy in the West " could overturn the results in favor of the candidate of the National Republican Alliance (ARENA )

We must remember that Central America is a very strategic location for the United States in its " fight against drug trafficking and terrorism ," conquered El Salvador , as an "ally " entrench the steps in that purpose.

To this we add the events in Venezuela, at present, remains to be seen if that could influence in the electorate.

But taking into account the tacit support of the disqualified candidate, third, former President Elias Antonio Saca, for Antonio Sanchez Cerén , FMLN , this organization during his government continued progress, enjoying , Salvadorans , and because " very nearly " , was elected in the first round ....

I "conditioned” for Sanchez Cerén prediction as the next President of El Salvador, where warning, I have very high, chances of being wrong.
Publicado por Manuel Miranda en 2:05 PM No comments: Enlaces a esta entrada

Email ThisBlogThis!Share to TwitterShare to FacebookShare to Pinterest
Etiquetas: Elections 2014

Proposals for Peace in Venezuela.

My suggestions to be discussed in the framework of the Peace Conference. 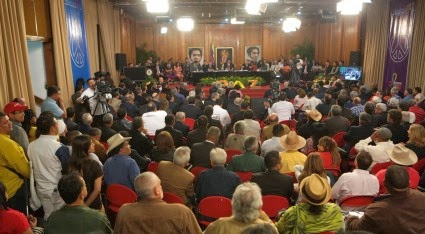 I must congratulate President Nicolas Maduro, for convening the Peace Conference, necessary to detect problems, find solutions and implement them, with the participation of all economic, political, social, academic, professional and religious Venezuelans.

For that reason, it is my duty to take me to that call and making these proposals, to be incorporated into the debate.

My readers will remember that I have allowed myself for a long time, make calls attention , in terms of roads or feasibility of some measures taken in recent years by President Hugo Chavez.

For those who follow me do not give, I invite you to templates “Venezuelan politics” and “economics and finance”, where you can see many of my observations.

Responsibly, the current political and social economic crisis, the we sensed the palpate, but the same continued running, until we got to this situation that we suffer.

I understand that the Commander Chávez, with his measures intended, give a turn to the enormous social inequalities that have endured for decades Venezuelans, taking many successes that have allowed me to highlight and evaluate.... But not in the other , I've also allowed to criticize , aggravated that after his untimely death , instead of being checked and rectified , were " depth " with its unfortunate consequences.

Liberalization of the exchange market.

First of all, we should note that President Nicolas Maduro has gradually taken some “adjustment measures " , highlighting the "liberalization" of the foreign exchange market by SICAD II ... Where everybody can buy or sell currencies, under clear rules .. . Which does not happen in the “parallel market “in which users we were exposed to scams.

With this timely step, it opens the way to stabilize and economic stability, which allows us to acquire raw materials, goods and services abroad, in this era of globalization ...

Measure which should be deepened with these others:

Return expropriated and nationalized enterprises to their rightful owners.

Unfortunately, expropriation and nationalization of businesses of all kinds, has not yielded the expected results.

Instead of becoming productive entities belonging to the people ... They have become unproductive, bureaucratic, centralized and parasitic under the Venezuelan state.

Suggest: that these companies are returned to their owners, in whole or in part, by these measures:

- Full refund with compensation or facilities, to resume operations immediately.

- Partial refund, implementing “the Cuban formula 50-50 “between the Venezuelan government and the owner ....

I want to tell Venezuelan businessmen that their Dominican couple doing business with Cuba, they love this system because it gains them out cleans ...

- Unions: Companies or farms, for some reason, can not be returned to their owners, they should be transferred to their workers through the mutual system.

But, considering that must be trained for such purposes that do not happen with similar plans implemented by the Bolivarian Government.

Proportionality in the spaces of power.

The Bolivarian Constitution provides for the election of the holders of the Moral, Elections and Judiciary members "qualified majority”.

That formula is to force CONSENSUS regarding people who should fill these important positions.

Currently, they are “vacant” and their owners "de facto”, which does not give them sufficient legitimacy to acts established.

I remind you that President Hugo Chavez before his unfortunate departure to heaven , had almost decided to grant this measure unfortunately could not be, for reasons known to all , in this sense:

It was time to " turn the page " , the " clean slate " ..... Political leaders imprisoned, with open court proceedings or in exile, should be benefited by the amnesty.

Where they cannot be , for some reason or another, whether a review thereof , granting injunctions probation under the Act are

From my point of view, a high priority ... This these sources of jobs, areas of opinion, information and entertainment Venezuelans recover. And sends a strong signal of positive changes to the country and the world.

Respect and recognition of others.

This suggestion should be the first; all the Venezuelan political factors must respect one another.

Everyone, recognizing the constitutional powers of each.

And remove all confrontational and insulting language.

With these basic measures, we propose for the consideration of the Conference for Peace, we understand, we recovered governance, order, stability and peace we deserve Venezuelans and Latin Americans in general.