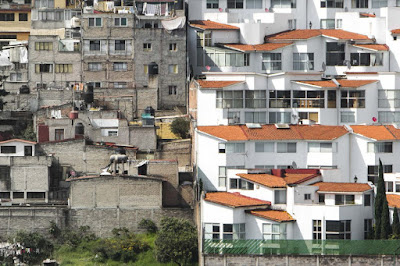 A ferocious onslaught against the poor, be they African American, Hispanics (recent immigrants or otherwise), low income whites and the whole rainbow gamut of other minorities.  A serious attack is taking place against them due to the white hot frenzied real estate market.
This is occurring in mostly coastal cities, where home prices are experiencing radical increases.
This is forcing the aforementioned groups in general to flee the large cities, the long forgotten inner city of the great metropolises in particular, where if you were poor and tough you could find refuge and live a hard scrabble life.  These areas are now highly coveted as trendy by middle class youth tired of the safe suburban life that their parents strived to give them.
However while they are leaving the suburbs and attempting to be “gangsta" and live in the city, they have brought the suburbs with them.
These middle to higher income (we will not use the word, “class”) individuals will not tolerate a true urban setting with the sights, sounds and smells of “da life”.
Cities are being converted into one big Ikea in some instances, where the new urban chic can work and play.  All the while poorer longer term residents are being shown the door.
Crane after crane rise like giants and leave shiny new magical looking quasi-skyscrapers in their wake.  If your lucky and you actually owned real estate in the area some of that magic might ‘ve found it’s way into your bank account. If not you may sadly want to google the location of your nearest homeless shelter or pack up your things and move far away.
This Great Gentrification is done under duress, high price and fee hikes, rezoning techniques on the part of lobbyists and developers against the current tenants that are by and large minorities in the lower income zones of Miami aims to dislodge anyone who plans to resist the gentrification.  We found inspiration of what is occurring in Kevin Baker’s article in Harpers Bazar on what is also taking place in Manhattan.
The Great Gentrification of Manhattan began timidly in the early to mid 1990’s gaining strength after the turn of the century.
The one in Downtown Miami began in deadly earnest and at a dizzying pace just shy of 10 years ago, circa 2007
Read more https://usareally.com/1172-the-great-gentrification